Exciting things happen just blocks away from you every day without you ever knowing. Tito gives users an opportunity to share events they see, get notified of popular things happening in their area and even make money from selling photos of these events to the news.
‍
My role in this project focused on UI Design & Rapid Prototyping. I worked alongside 1 Product Designer, 2 Developers & the product team at Tito.

Launched on iOS with 5 Star rating

User time per session up 230% from beta release

When Tito contacted me they had been in beta for a little over 2 months and had gathered a wealth of feedback. Their users loved the concept but many shared the opinion that the app looked outdated and didn't feel like a smooth and easy to use platform.

The main objective of the project was to overhaul the UI to a cleaner and more modern look & feel while maintaining the core of the app to save on development time.

The Tito team had already put together comprehensive documentation of user feedback, error states & the steps inside the app that users were frequently getting stuck on.

We took this feedback and grouped it into buckets, collaborating with the product team to set a priority level of each bucket. From here we deep dived into each bucket, assigning high to low priorities on each individual task and then got to work.

Tasks receiving the "high" designation either were having a large negative impact on the user experience or would require the highest development effort and we wanted to allow the team to get started on them as quickly as possible.

Before tackling the overhaul of the entire app we were tasked with updating the Tito logo & brand colors. Working closely with my product design partner Shashaank Srinivasan we produced a series of different logo explorations for Tito, all based around their original concept.

The final design was chosen to stay true to the original Tito brand while feeling more modern and being easier to read as a icon sized logo.

Because the Tito team was able to conduct the majority of our needed research and analysis before the project started, we hopped right into high fidelity concept work. After the initial screens were approved we rolled out the style and behavior to all of the other app screens.

Three of the most important screens in the app are the Map (home), Feed & Profile. All these screens received a full visual rework and came out feeling like a totally different experience. 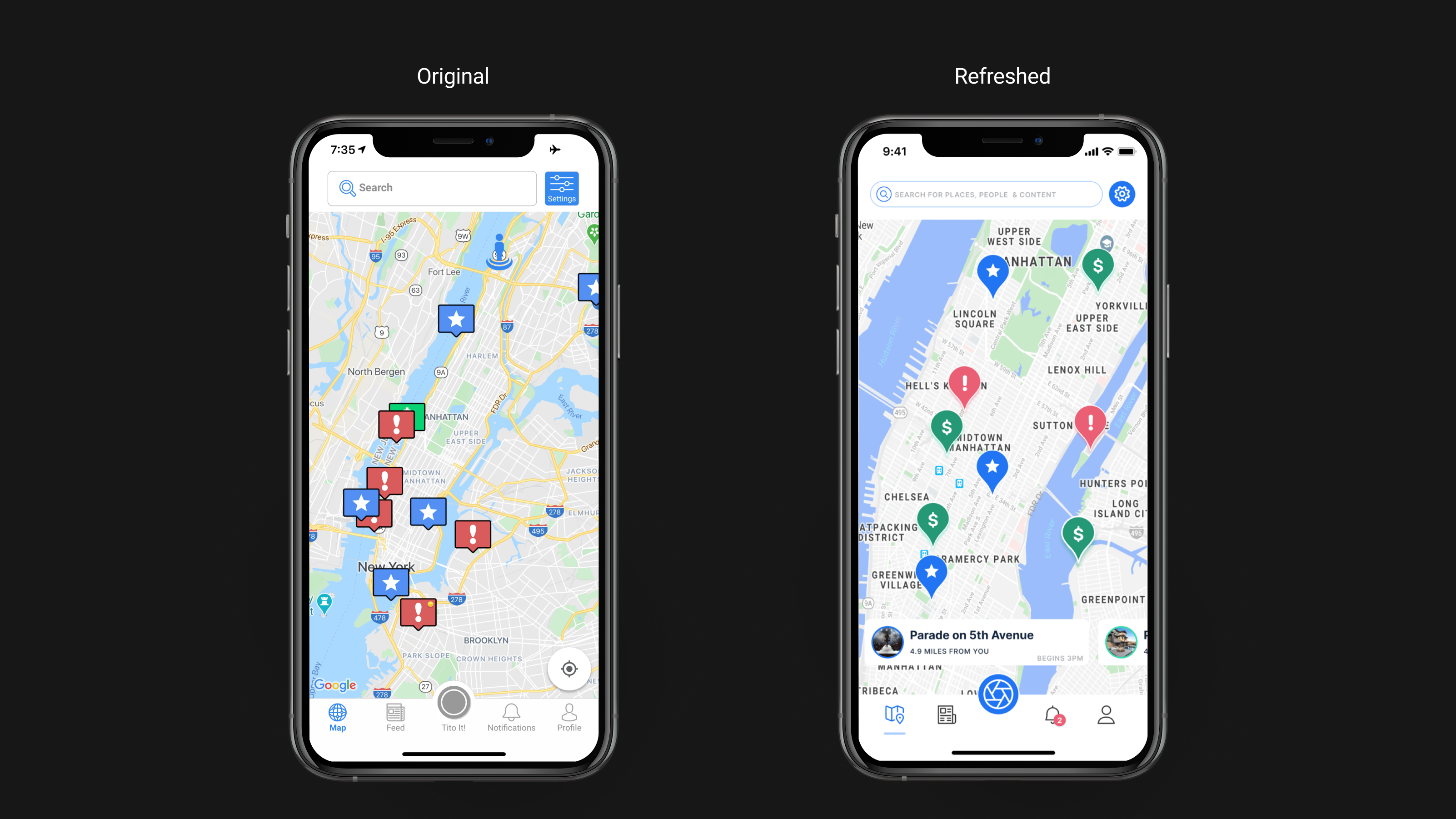 The map is the first screen users see when they open Tito and is key to helping them find local events, alerts and photo opportunities.

Keeping the heart of the map we updated the pins to a more modern google maps like look & feel. The addition of a slider to view important & highlighted pins was also key in delivering a smooth experience and opening up advertising opportunties for Tito. 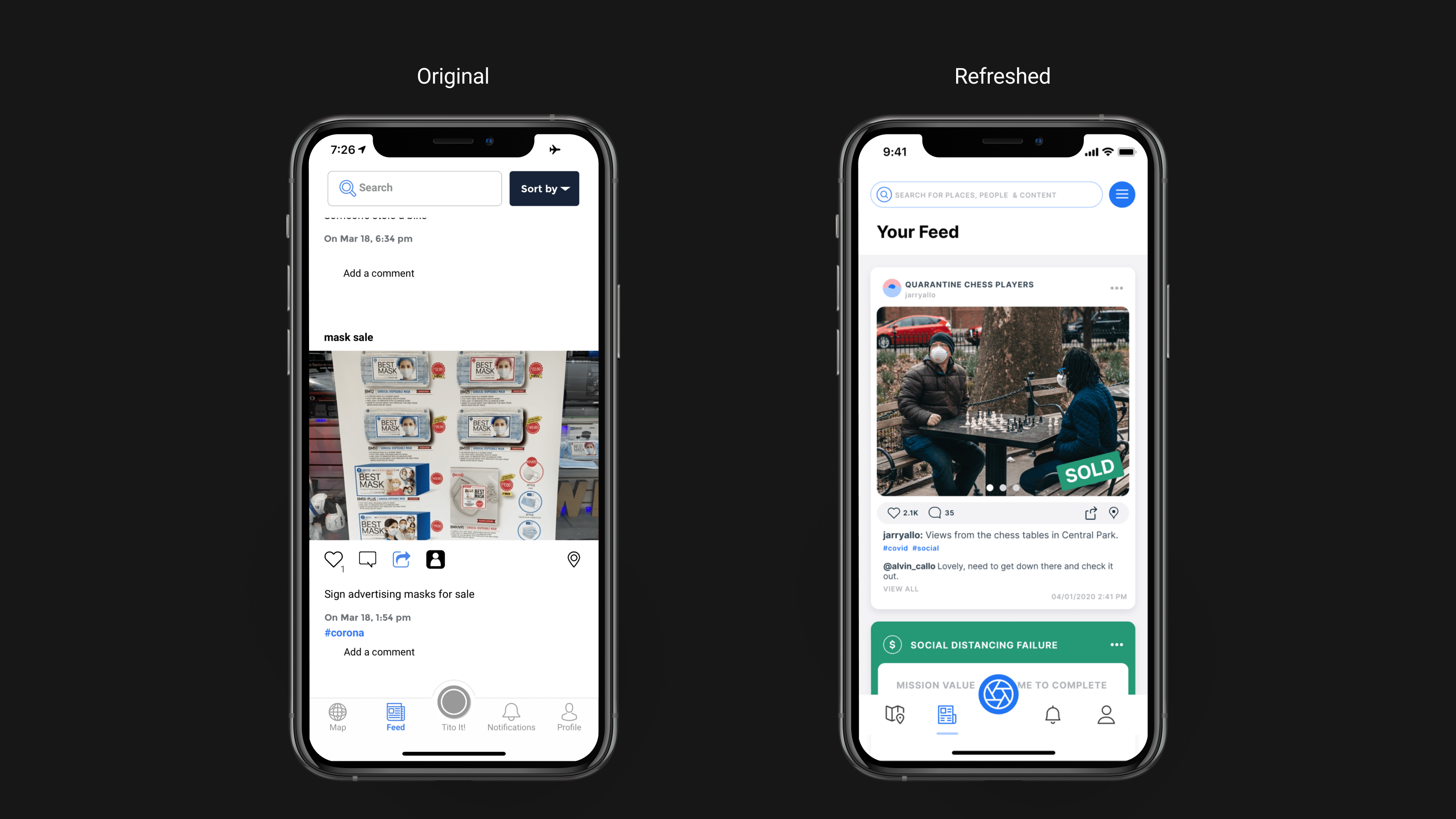 The feed was completely redesigned, starting with moving to a card style layout instead of a constant feed. We made the decision to transition to cards because it gave us the opportunity to highlight different types of points of interests with color on each card instead of a continuously scrolling feed.

Another major adjustment to the feed was opening up items to to being shared outside of Tito. Updating the sharing behavior helped users gain exposure to their content outside the platform and was a heavily requested feature. 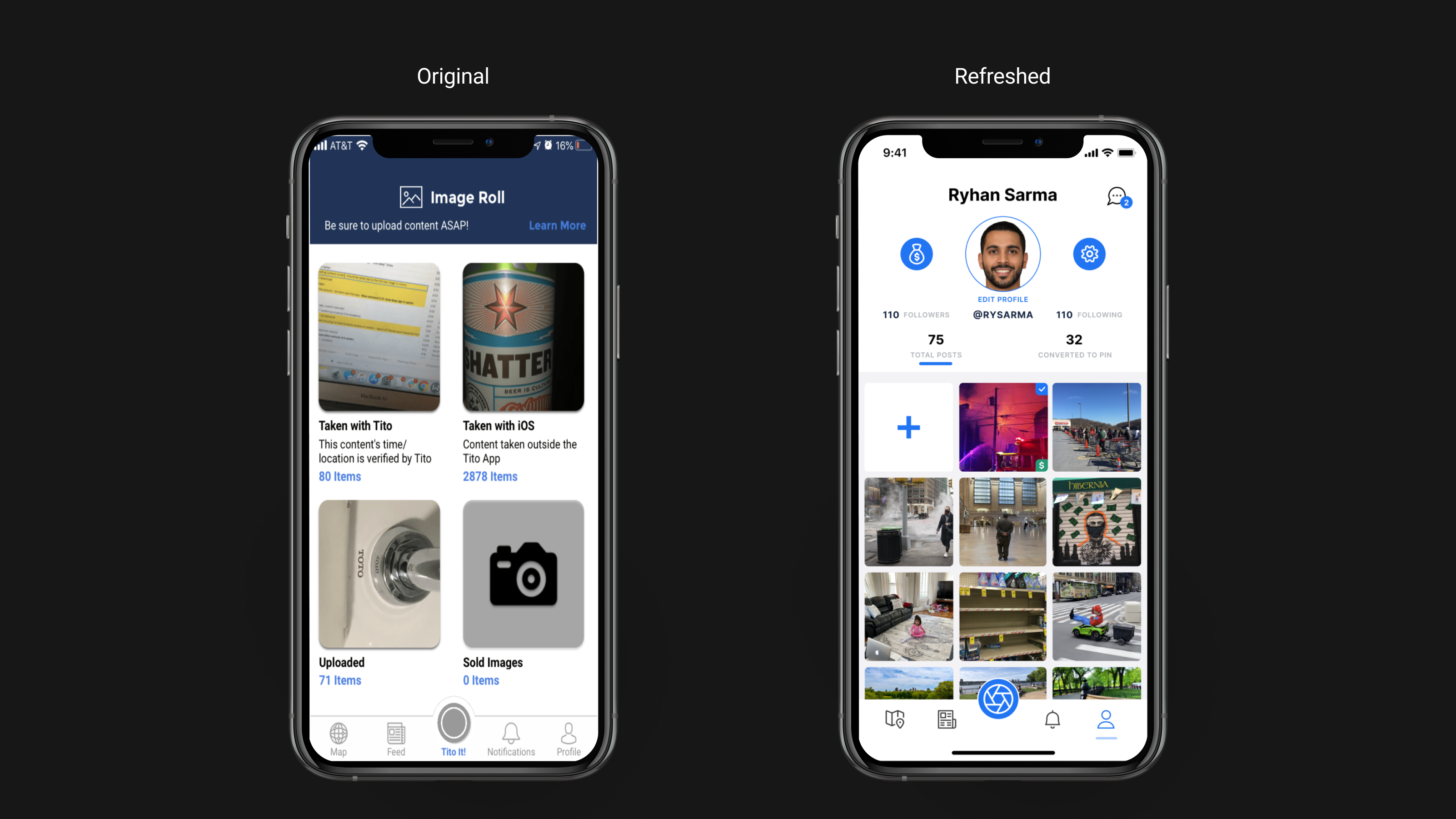 The original profile screens focused on your camera roll and the images that had been uploaded to Tito. We proposed building the screen from the ground up with a focus on easy access to your images and earnings from photos sold to media.

The updated profile screen highlighted your images, showed which have been sold, let you collect earnings and even chat with other Tito users. This is also where we started to show some of our social features, allowing other users to follow you and view the content that you've shared to Tito.

Being a MPV / V1 launch of the platform the team & I were really excited about the level of fidelity we were able to reach in such a short time. We took advantage of as much of the pre-existing app structure as possible and that worked really well for us.

We still have a massive amount of work to tackle in the coming months, rebuilding the navigation and adding in new social features to help our users build connections with contributors around the world.